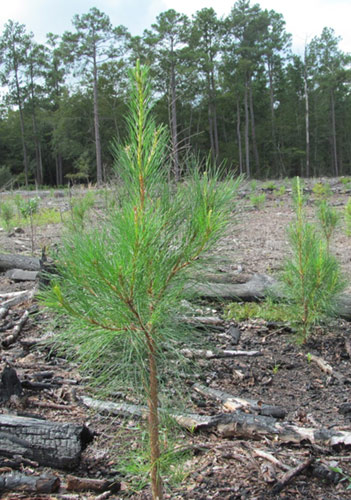 Each year ArborGen produces enough seedlings for reforestation on a wide array of sites to cover approximately 600,000 acres, primarily in the Southeastern United States. Most of these sites are classified as cutovers, where all of the timber has been harvested to make way for a new stand. Quite often, however, former agricultural crop fields and livestock pastures are converted to forestland, and this practice is known as afforestation.

Years of traffic by farm equipment and animals can cause compaction forming what is commonly referred to as a plow-pan or a hardpan.  The surface layer and the initial soil horizon is usually friable, and if a tree were planted 8-10 inches below the soil surface, you might not even detect the hardpan. The plow-pan is often 12-15 inches below the soil surface and limits the amount of root system development and nutrition availability for a newly planted seedling. Many times landowners plant former productive crop fields, only to be disappointed in tree growth two to three years later due to the seedlings’ inability to thrive in its new environment from soil compaction. Common symptoms include thinning of the crowns and poor coloration of the foliage.

Before planting seedlings, an operation known as subsoiling, breaking up the ground before planting, should be performed to shatter the compaction pan associated with past agricultural practices. This is strongly recommended for all sites formerly cultivated or pastured, which usually always has problems with soil compaction or a plow-pan (Zobel and Talbert 1984). Many studies have shown that subsoiling improves plant development and vigor (Gregory and Davey, 1977). Subsoiling minimizes soil compaction issues and allows new seedling roots to proliferate to greater depths. One other key benefit of subsoiling is that it prevents surface water runoff, improving soil moisture in the newly established forest (Zobel and Talbert 1984). Soil penetrometers, found at forestry suppliers, are extremely easy to use and are an invaluable tool to test for soil compaction before and after subsoiling. One such tool that is affordable and user-friendly is the Agratronix Soil Compaction Tester. A dial is situated so that the user can quickly and easily assess compaction levels inherent to the planting site. 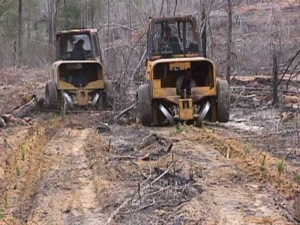 If former agricultural sites are to be machine planted, the mechanical planter is usually equipped with a “shank” that can be adjusted to a depth that will rip or shatter the plow-pan.  The seedling is then placed right behind the ripper in a soil medium where the compaction has been alleviated for better root growth potential. If hand planting is the only option, then subsoiling in the desired transect across the field with a farm tractor before planting is essential. Then the hand planting crew can easily follow the ripped line and place the seedlings at the desired stocking level. Either method of planting following subsoiling ensures the newly planted seedling will attain adequate root growth potential.

Finally, an equally important and easy task to complete prior to planting is to perform a soil pH test. It is not uncommon for former agriculture sites to have a higher than desired soil pH for most forest trees. Former pasturelands are usually limed, raising the soil pH to higher than desired levels for southern yellow pine. The soil pH range for loblolly pine, for example, is from 4.5 – 7.0, but is most productive and is more tolerant to herbicides at 5.2 – 6.2. University county extension agencies provide directions on how to conduct soil testing and can also analyze results with minimal costs.  Always consult with herbicide specialists before treating sites with chemicals both before and after planting.

Contact Your Reforestation Advisor to Plan Your Next Planting

On Monday, June 22, President Trump issued an Executive Order in which most new guest worker visas, including H-2B forestry workers, will be banned until December 31, 2020.

Although forestry workers were deemed “essential” for purposes of COVID-19, they were not exempt from this executive order, which could have impacts on forest operations.

As a board member of the Forest Resources Association (FRA), ArborGen is working alongside other FRA members to continue providing input to the Trump administration, including the Secretary of State, Department of Homeland Security, Department of Labor, and selected members of congress.

Yesterday a letter was sent to members of the Congressional Caucus on Working Forests and members of the Trump administration expressing concerns over the impacts of banning new H2B Guest worker visas.

With cooperation from ArborGen and its partners, FRA will distribute a survey to gather and provide vital information about this executive order’s impacts on forestry operations.

If you are tree planting, nursery, or orchard contractor that might be affected by this ban and want to participate in this survey, please contact info@arborgen.com.

Also, join us on the Reforestation Forum to discuss the newest developments concerning H-2B.

MCP® in Arkansas, Louisiana, and Texas

After years of research and investment in our orchards in the ARKLATEX Region, we are pleased to announce a Mass Control Pollinated seedling (MCP®) specifically for you.

Planting MCP seedlings, along with good silvicultural practices such as site prep and weed control, gives you the best opportunity to get the most profit from your land. Why?

Because these customized seedlings will give you both earlier thinning and harvest age. This means you’ll generate cash flow much sooner than with other seedling types.

Patrick Cumbie, PhD, Manager of ArborGen’s Pine Development program shows us what 4-year-old MCP’s can look like in Texas.  The ArborGen Jasper Nursery shared these great photos of your MCP germinants growing this Summer. This year’s crop will be ready for harvest this Winter and planting all over the Texas region as they will be come the best, high-performance forests for our customers – our friends in forestry. 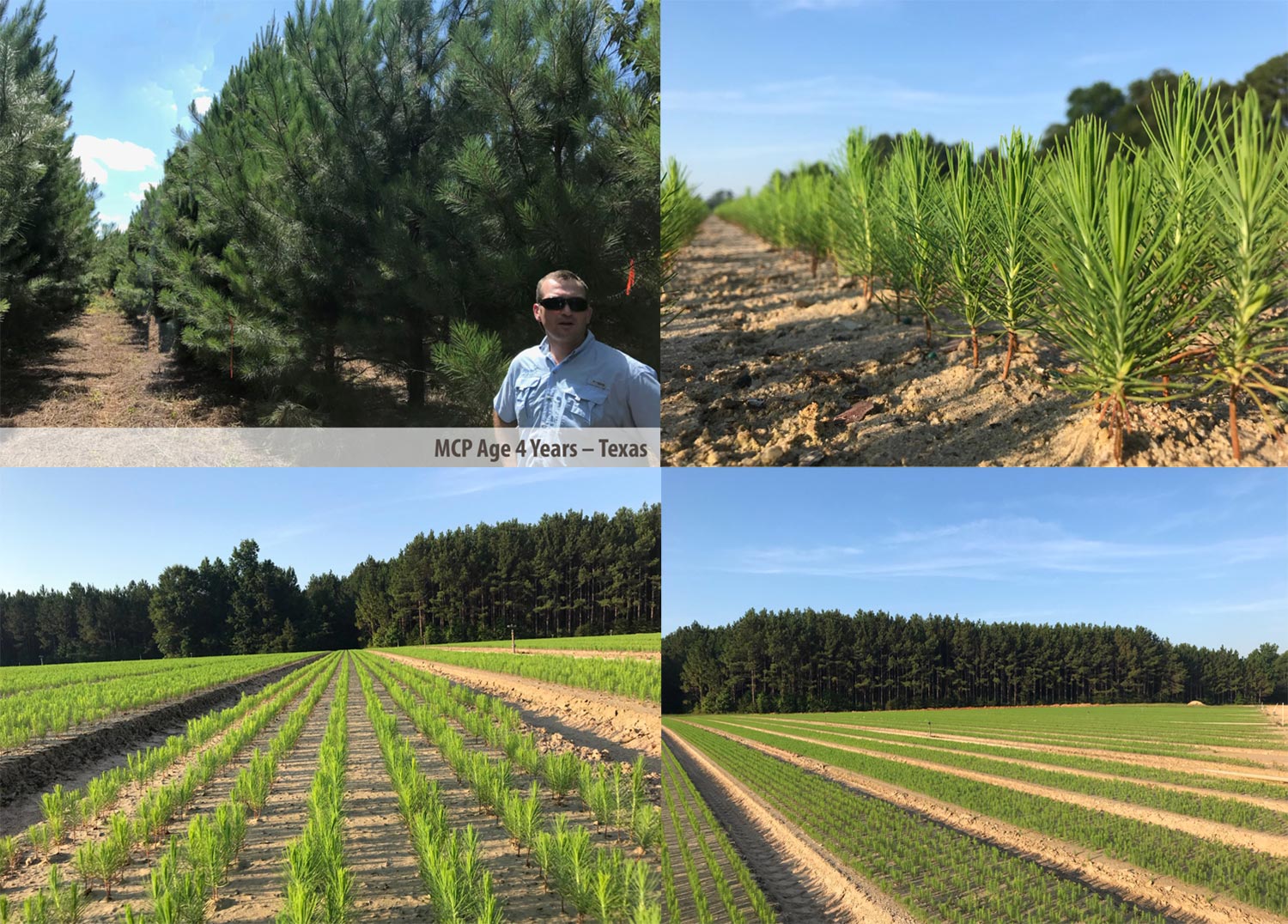 This means that by knowing your soils, minimizing or eliminating competitive growth, and providing proper fertilization, your ArborGen seedlings will flourish and grow into exceptional forests. 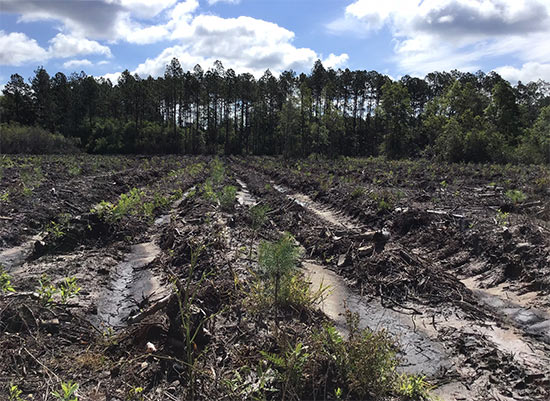 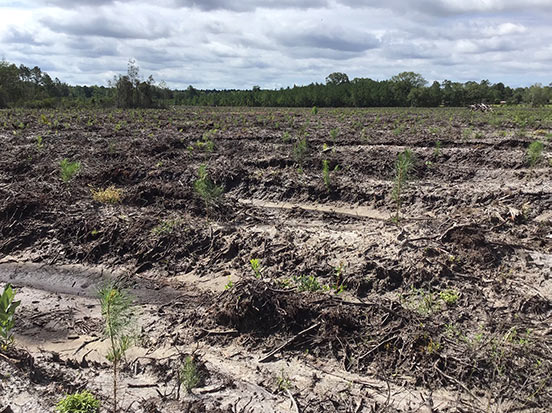 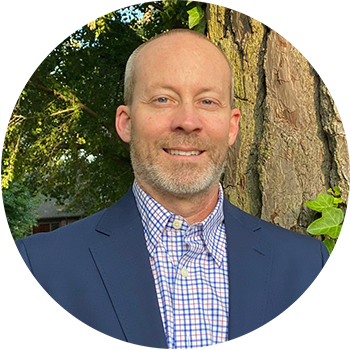